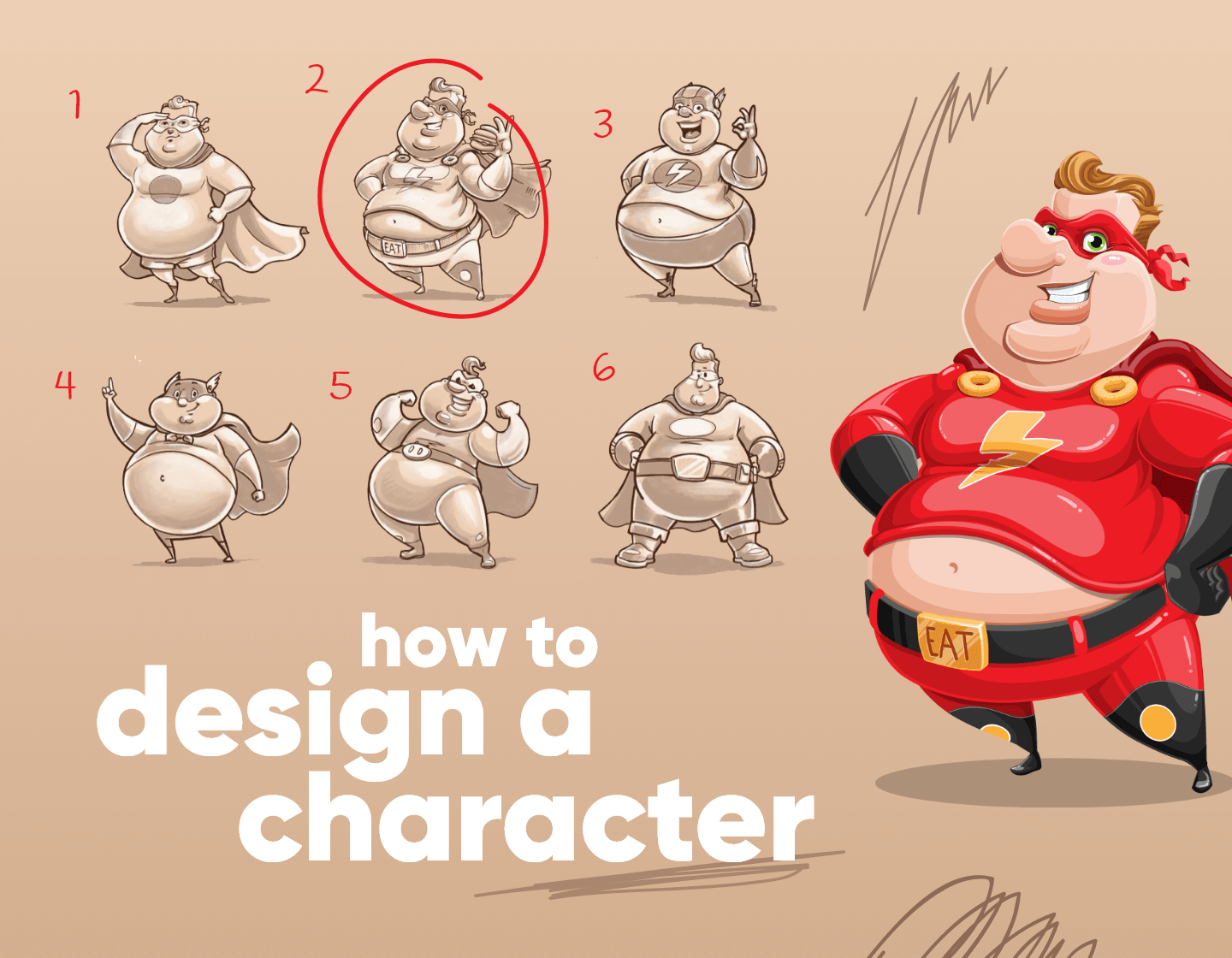 How to Design a Character: The Creator’s Guide to Amazing Characters (with Examples)

Character design is one of the most essential skills for an artist, however, unlike most skills, it doesn’t have a magic formula that can guarantee instant success for creating appealing charismatic characters. So why did I even start writing this article on how to design a character, you might ask.

Well, even with something as subjective and dependent on imagination such as character creation, there are some best practices and processes that could help you go in the right direction to design and imagine your character. This is why today I’ll take everything leading artists and illustrators have come up with and assemble a guide to help you with your character creation.

[Article Overview] How to Design a Character?

“…when you look at a photo or realistic drawing of a face, you see it as the face of another . But when you enter the world of the cartoon , you see yourself.”
― Scott McCloud

What Makes a Good Character Design?

Character design is the process of creating and developing a character for a visual story. This could be fictional literature, a brand story, comic books, a campaign, a video game, or a cartoon movie. What’s important is these characters and mascots are what drives the story forward and get people invested in it.

The main goal for every character creator is to design a character that is memorable and audiences connect with. Your character might have a serious business attitude, might be playful, goofy, emotional, or even evil incarnate. Whoever they might be, the character must be relatable to the viewer. Successful and memorable characters that manage to get people to have an emotional relationship with your story come from the ability of the artist to truly understand the character’s personality and backstory.

To summarize, a good character is:

Step 1: Do Your Research

In case you already have the basic idea of what your character is going to be, this makes it much easier. Imagine you wish to make a sea creature. Your research will include browsing through images of existing sea animals, sceneries, items, color palettes, and everything that will help you create a moodboard. Browsing through already existing works of artists can be also a very valuable experience in gathering ideas, unlocking patterns for successful sea creature design, their overall aesthetics, and more.

If you start from scratch, however, you can start off by browsing Pinterest boards, character design magazines, try to capture the mood you’re looking for. Do you want to design a human? An animal? Something in between? This is where moodboarding is essential.

To sum it up, here are the things to consider in your research phase. 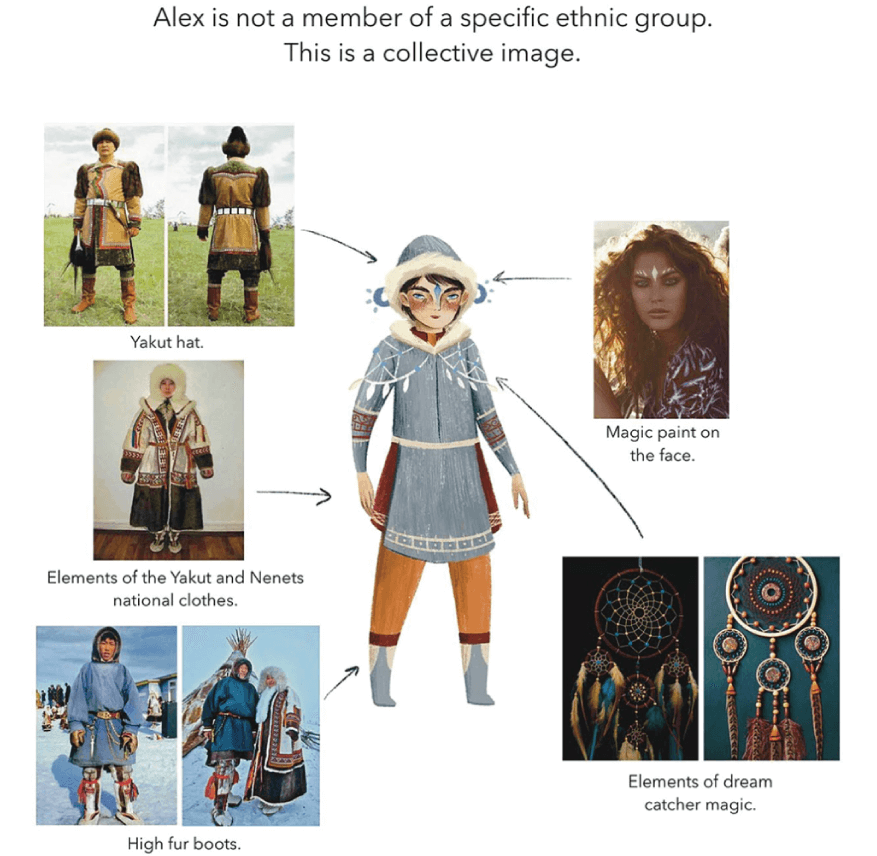 Character design. Alex is the shaman of music. by Ekaterina Anikina

Step 2: Think of the Character Traits

Character traits fall into 4 loose categories: overview, physical appearance, personality, and auxiliary traits. It’s a good idea to work with a pre-made sheet where you can write down your ideas. This will give you a great view of your character progress as a whole. In addition, you will also know what’s missing in your character and quickly come up with a solution based on the traits you already wrote down.

So let’s start with the general information. 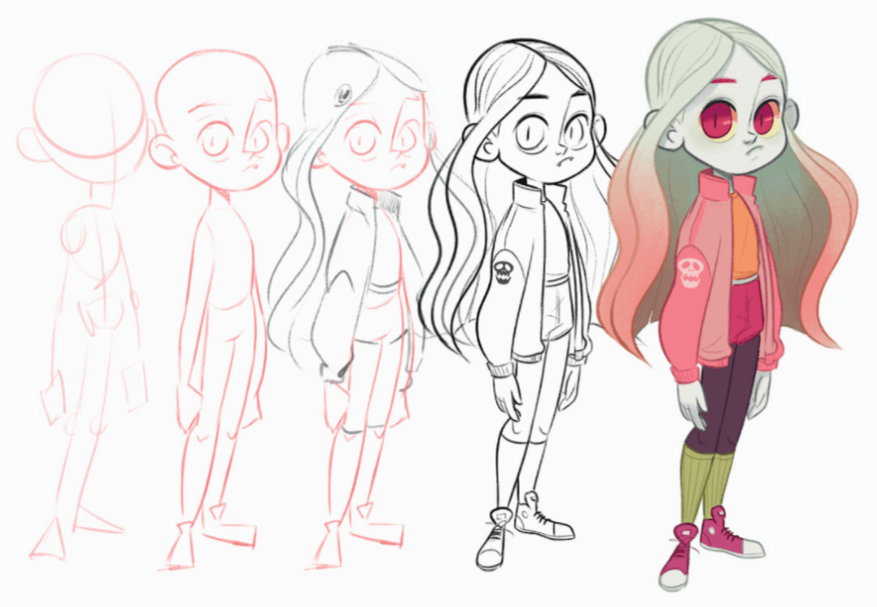 Sometimes it’s hard to start with the general description, especially if you start from scratch. You can always finish with the physical and personality traits first and go back to finish the overview. 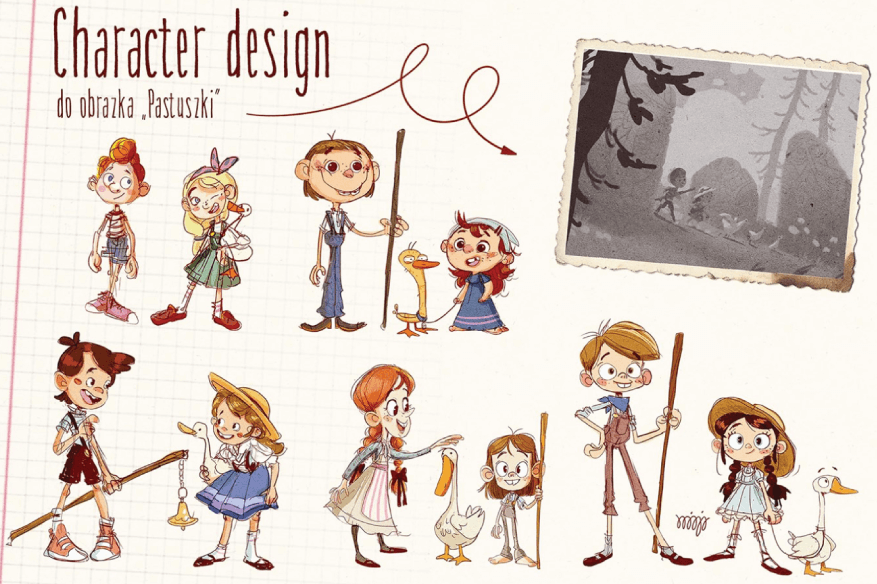 Physical Appearance of Your Character

This is the facade of your character that will make the first impression and capture your audience’s attention. In short, what does your character look like? 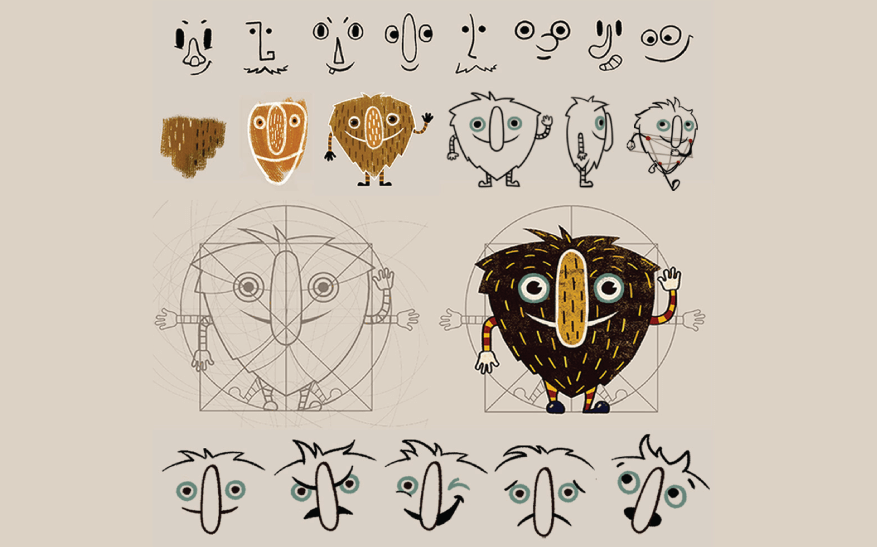 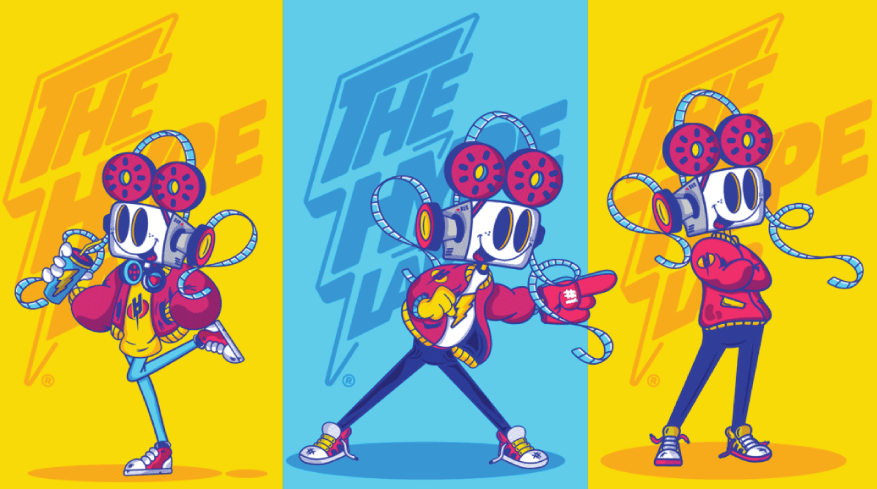 Great character design is rarely just about the physical traits. Your character might look amazing and make an incredible first impression. However, it’s their personality that will ultimately win your audience and make them stay.

Fortunately, there are a few databases and techniques that can help you get a direction. Writers who need to create compelling relatable characters often use the MBTI and enneagram systems to help them build their characters. With this in mind, even if your character is meant for a brand and doesn’t have to be that complex, they still need to have a strong presence and personality. 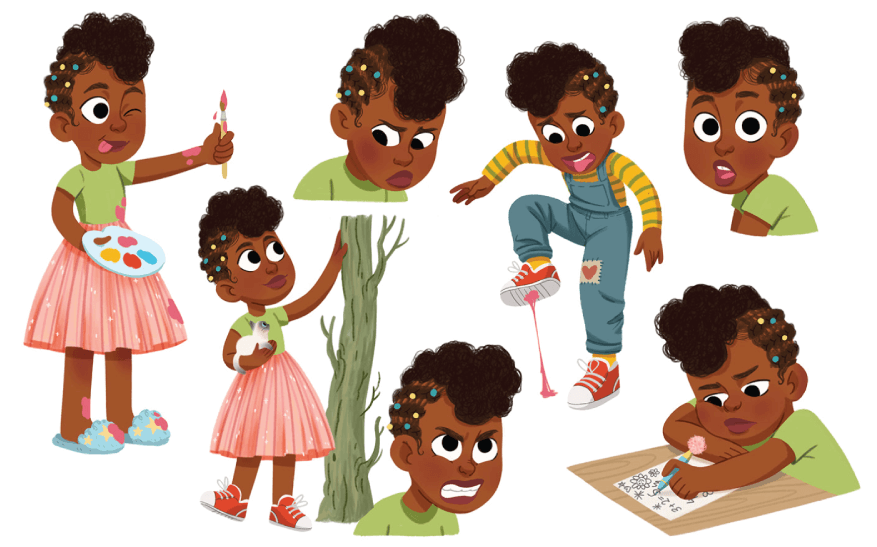 This category is more about the body language that hints at your character’s temper and personality. With the right posture and walk or the way they move their hands, your character may look very confident and assertive, or shy, or energetic. You can make all of this quite visible through the motion lines. 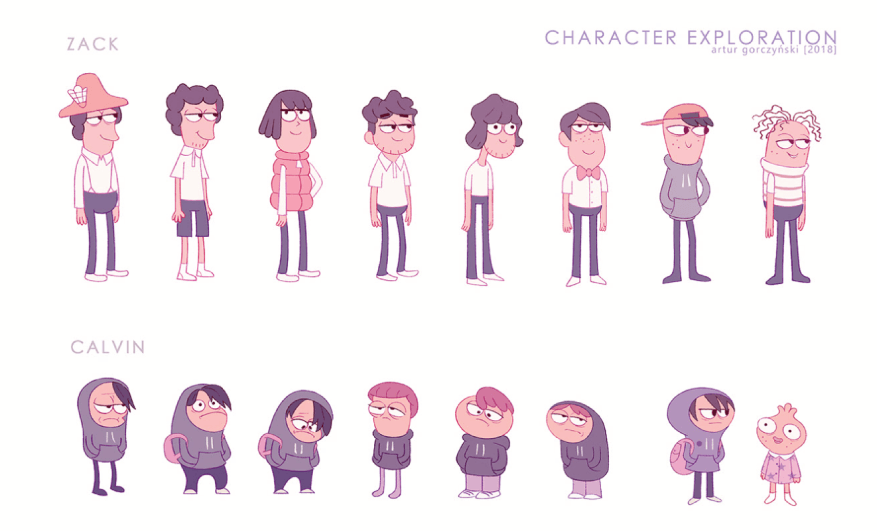 An Idiot CaT by Blad Moran

Sketching is the most important part of the character design process as it is when you’re actually creating. Everything else from there is just polishing. In this phase, you decide and draw all the visible information: the shapes that build its form and even personality, the lines that communicate their movement. This is your brainstorming session that will give life to your imagination.

Here is what you can do in this phase: 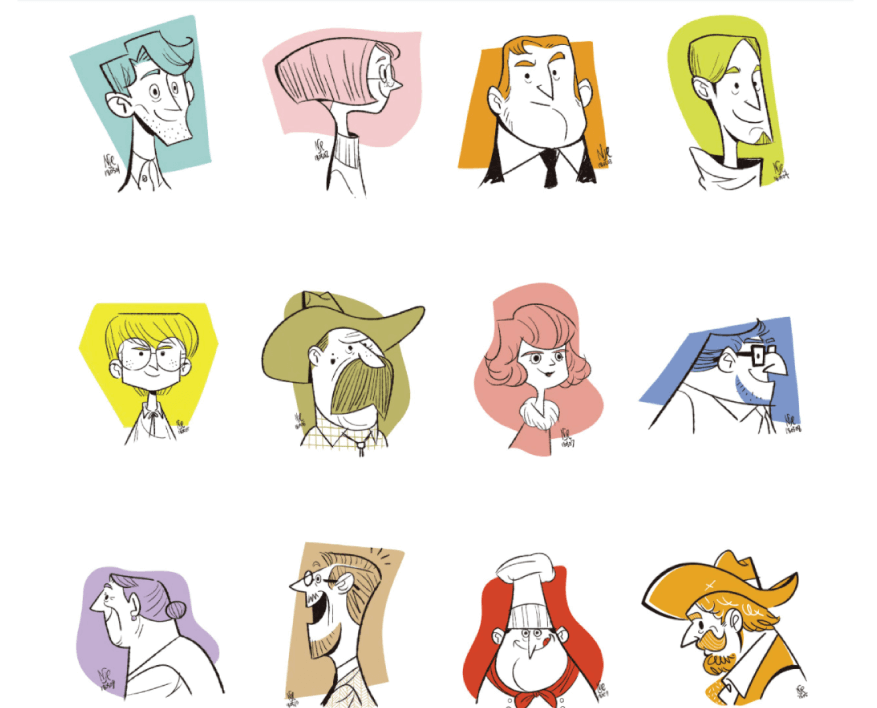 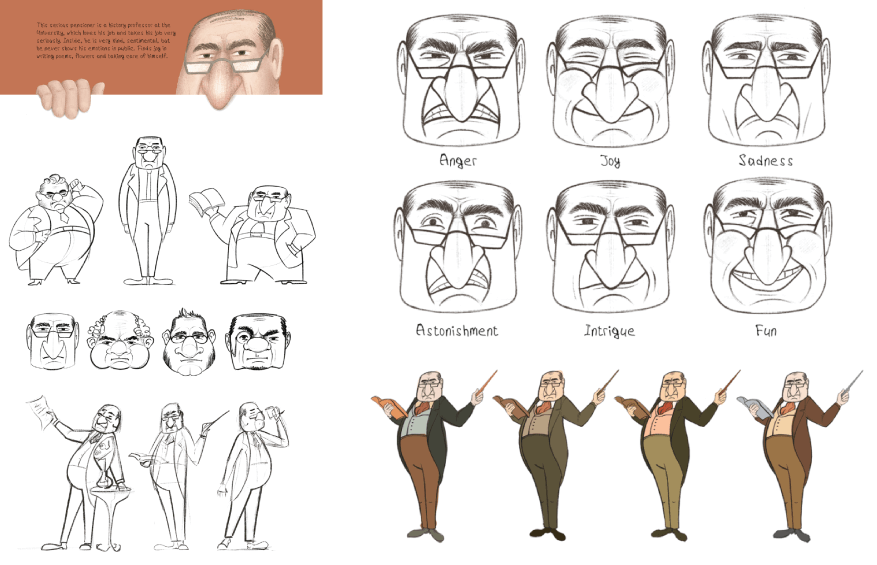 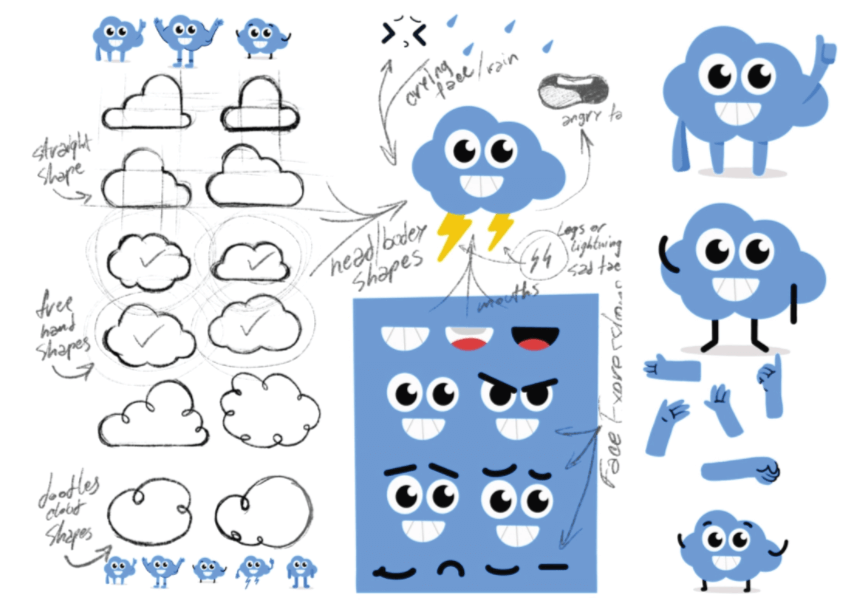 You’ve done the hard part. Now it’s all about relaxing and exploring your character design further by adding facial expressions, some movement, and the environment. 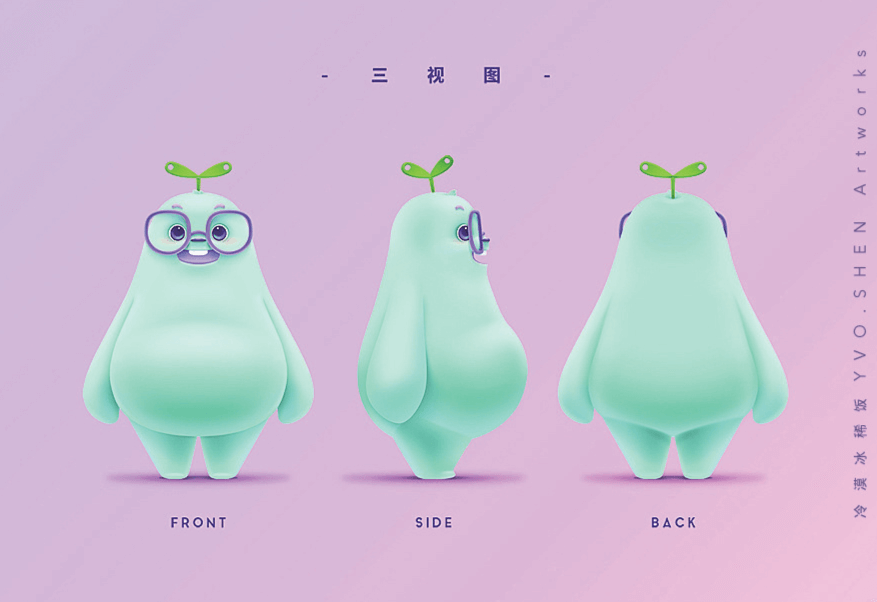 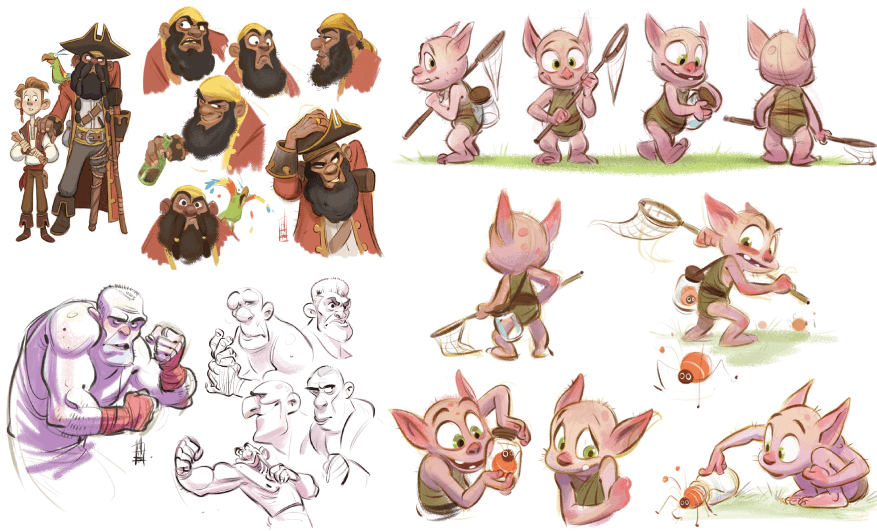 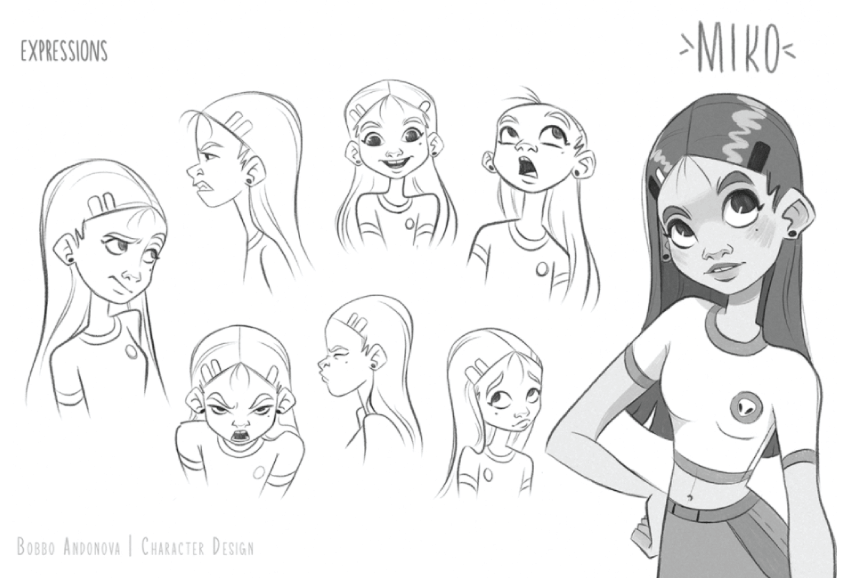 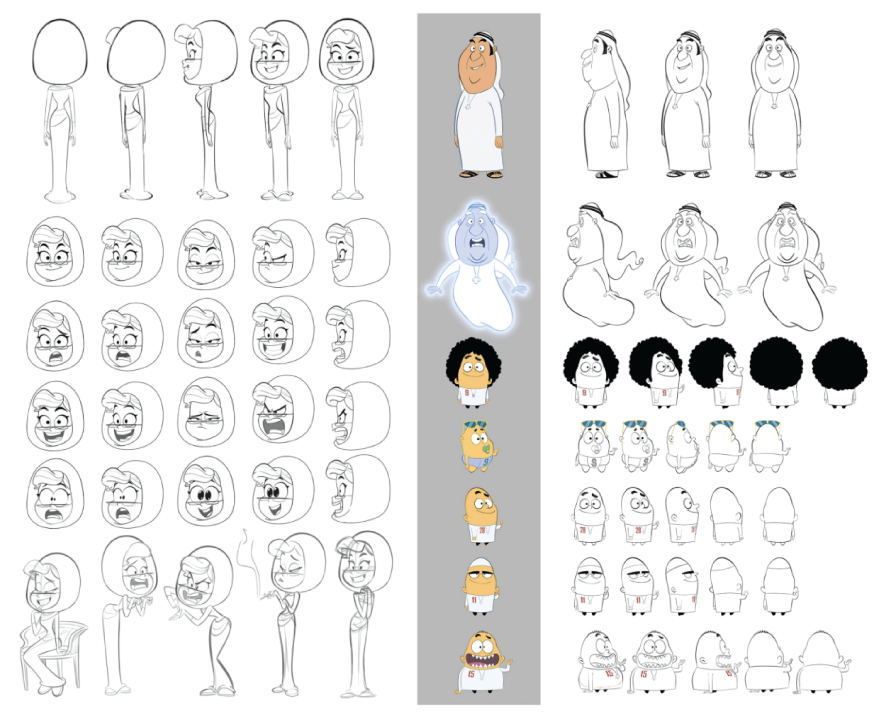 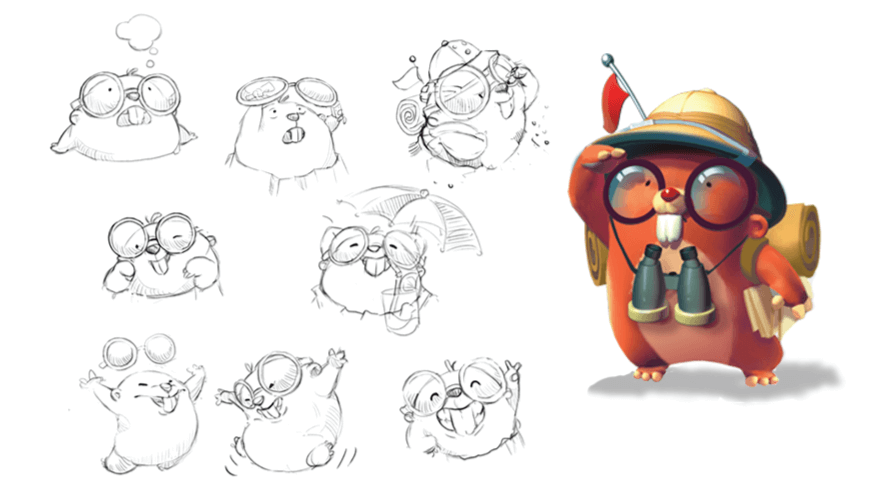 Character design for The Moleys game by Esther Diana

Step 5: Prepare The Vision Board

Now, time for the proper presentation. You can do that by creating a few moodboards that feature everything that makes your character: sketches, poses, color palette, expressions, styles, outfits, catchphrases. Sometimes, words aren’t enough to present the whole concept, let your moldboard make the presentation for you.

By the way, you can also download a pre-made editable moodboard to get inspired for your character presentation. Here we’ve collected 20 free moodboard templates you can download and use for the occasion. 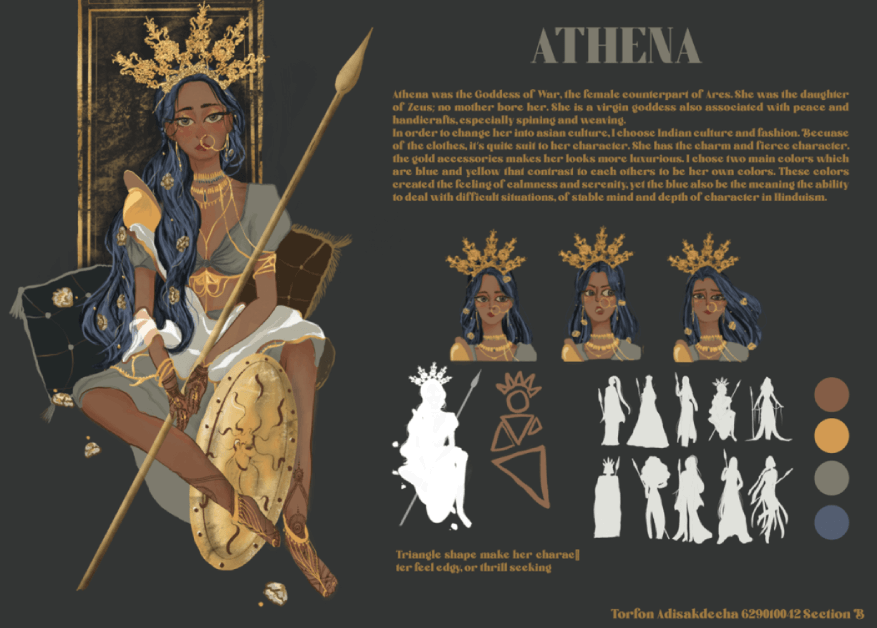 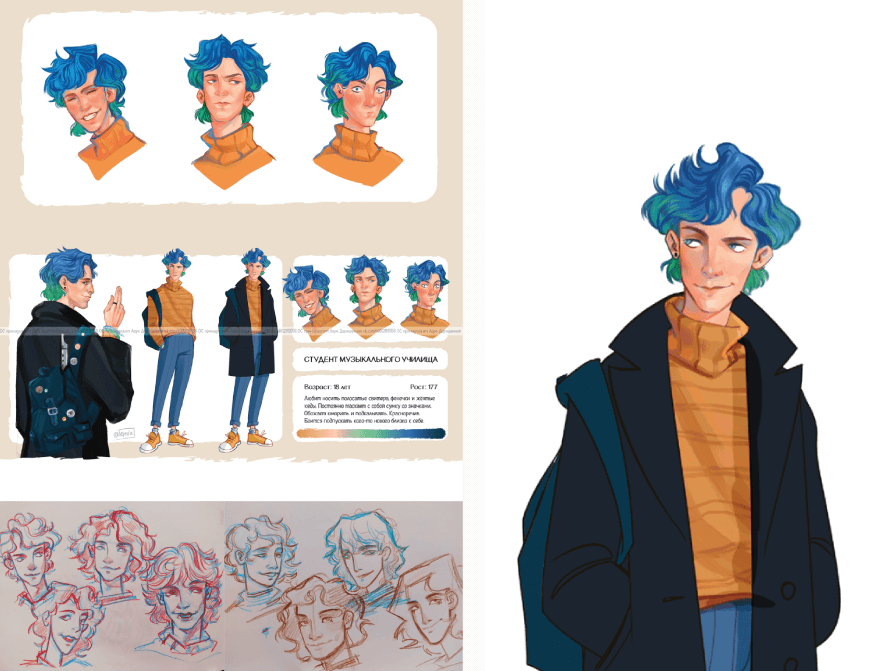 In this section, I’ll go through some highlights that make a good formula for a memorable character. Most of the things we’ve already discussed in some of the steps. However, here I will highlight them so you’ll know never to overlook these principles.

In each case, there’s an audience to focus on and each audience has different needs and preferences. 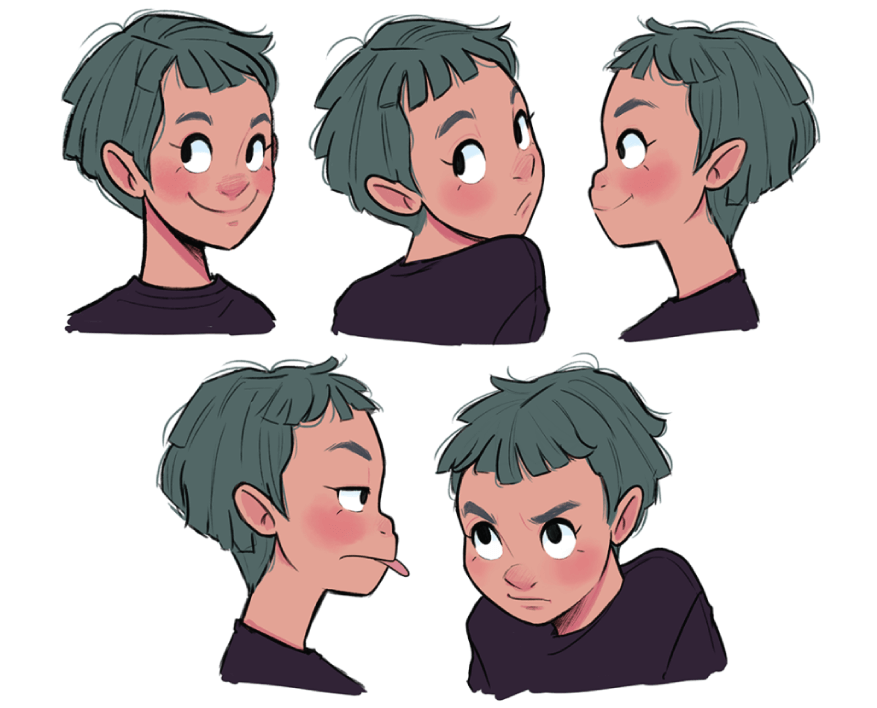 No matter what type of character you’re designing, one thing is for sure. There are and will be, hundreds of similar characters out there that look like yours. The key is to create something strong enough to get your audience’s attention. Something distinctive and different, even unusual.  Blie skin? Crazy hairstyle? Disproportionate long feet? Why not? 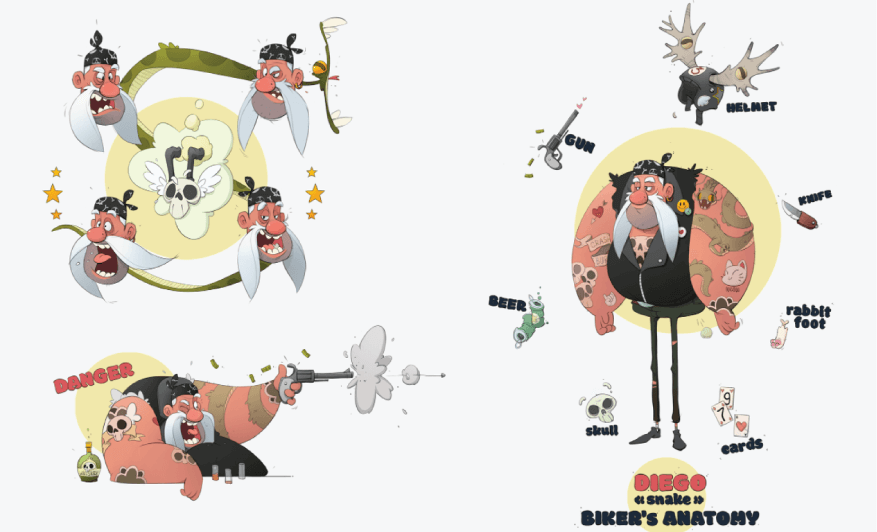 Try turning your character into a silhouette and see if it’s still distinct and recognizable. This applies also to the poses and emotions. For example, if you keep the limbs separate, it would be easier to recognize what your character is doing from the very silhouette. 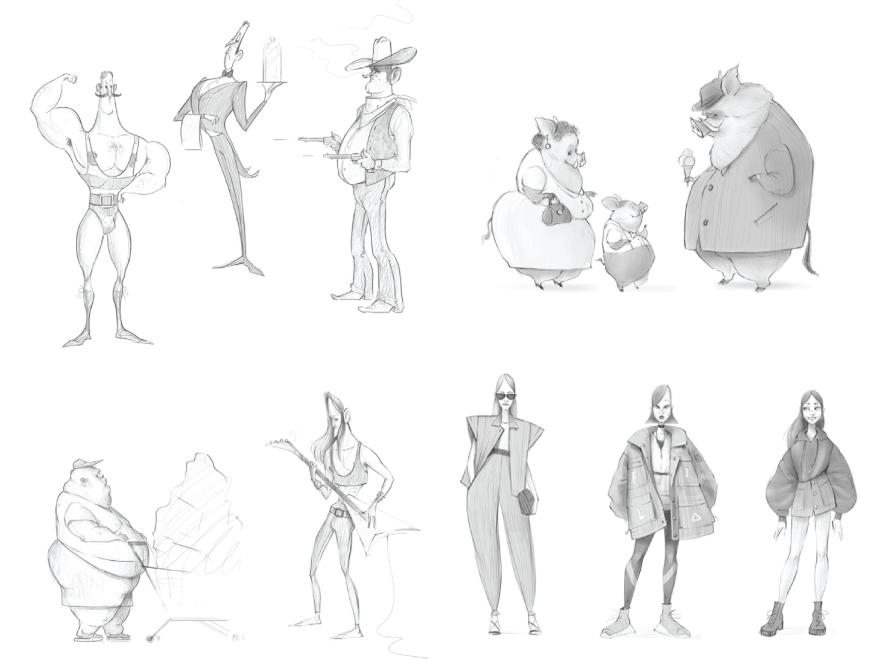 Realistic proportions are kinda boring and predictable. Unless realism is a must in your current project, try to create a distinctive shape for your character by playing with the natural proportion. When you know how to draw different body types, you will be able to customize any body shape to fit their personality.

If your character is a ninja or assassin, try to convert the fact they’re fast, agile, and stealthy by making them small, thin, with long limbs, ideal to climb and hang from a roof.  Features that define your character are your best target for exaggeration. For example, if you design a strong warrior or a barbarian, make their upper body muscles crazy oversized and distinct. 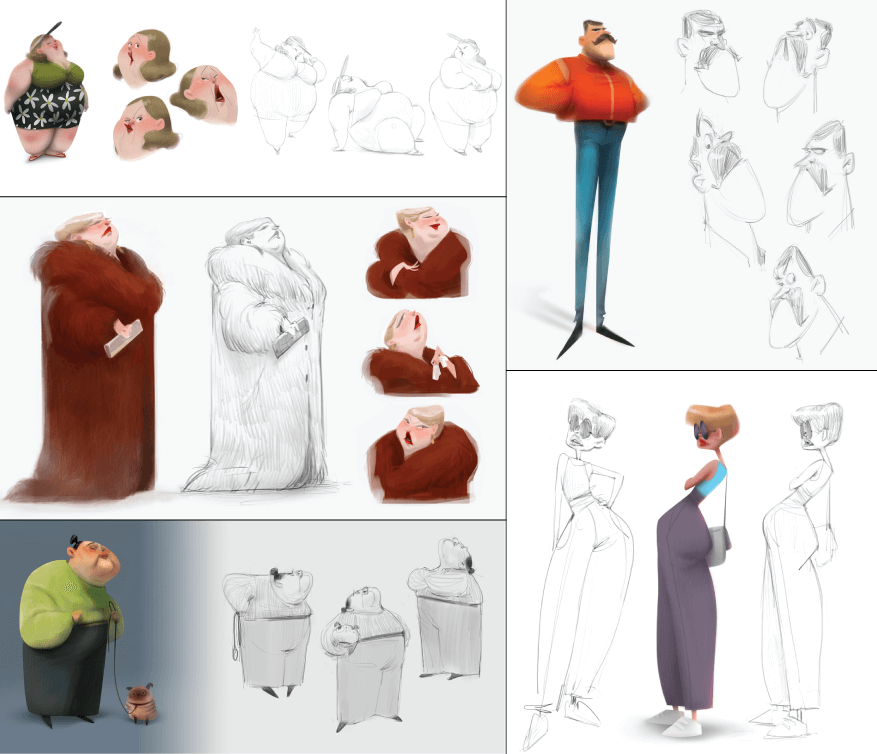 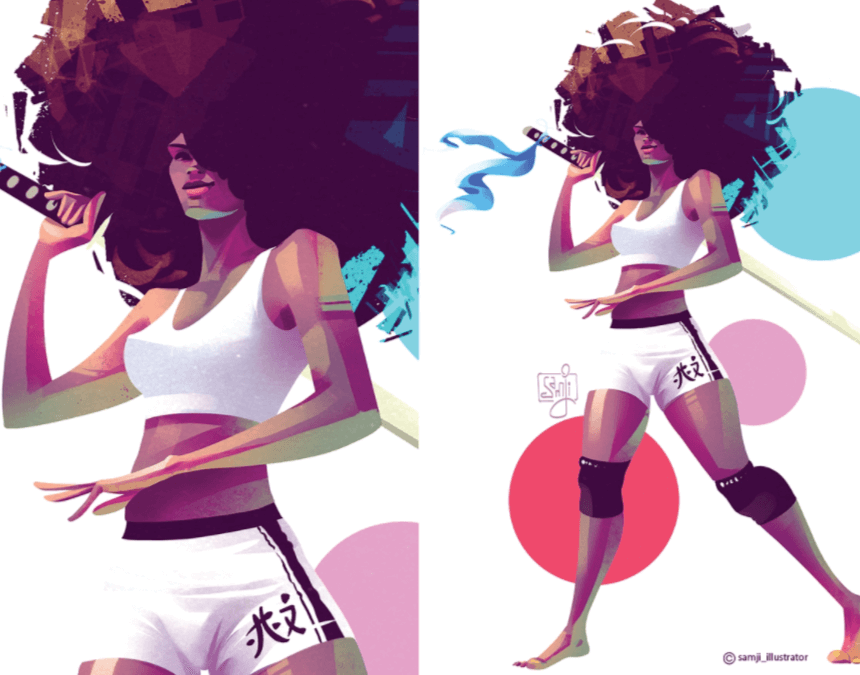 You’ve reached the end of today’s journey on how to design a character. In conclusion, there isn’t a defined formula, however, there are a few best practices and things to consider before jumping on the drawing board. More importantly, your character is much more than a visual, it has personality, temper, and appeal that makes them distinct from every other character. I hope this guide inspired you to give life to your character ideas and make them absolutely awesome.

In the meantime, if you feel inspired, there’s more where that came from. You could check out more articles with insights and inspiration like these: 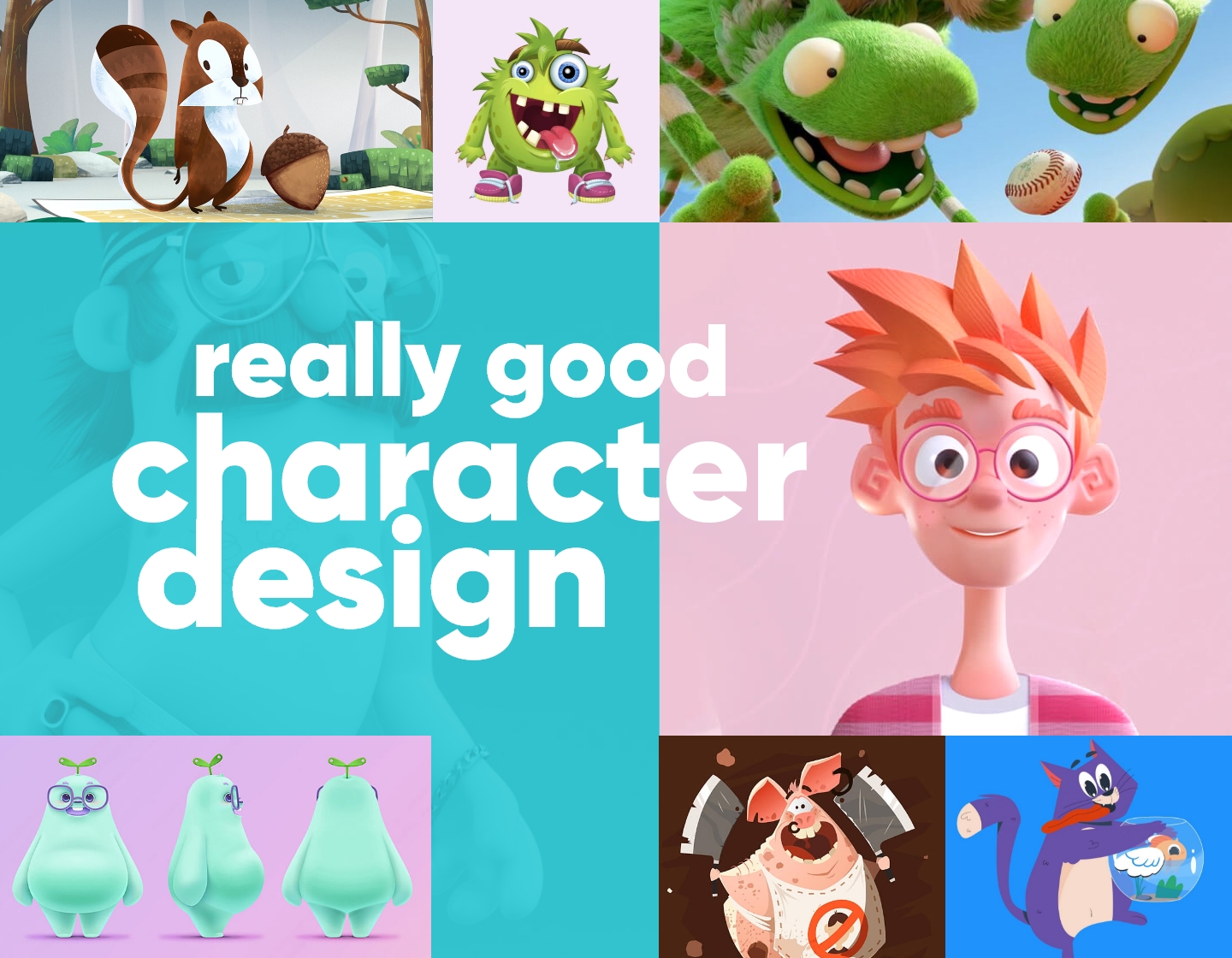 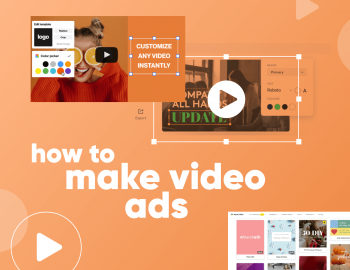 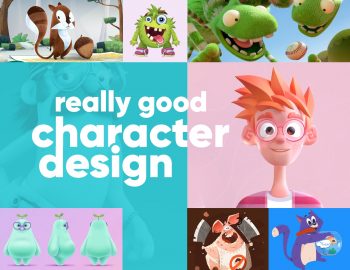 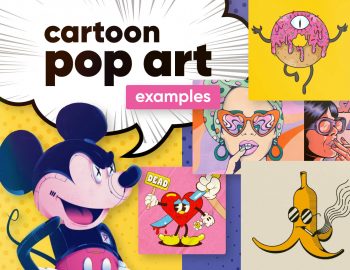